* Anna/Kate Band on Tour at MusikFest
​in PA

* Temi is thrilled to be a part of Anna/Kate Band.Adding Cello parts to the wonderful original folk/pop music. 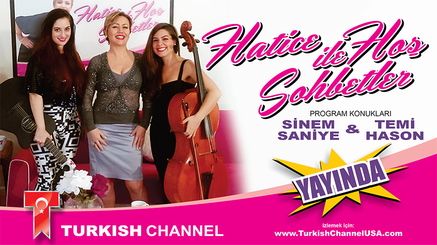 * Watch Temi's interview at the only Turkish Channel in USA.
With her surprise performances!
https://www.youtube.com/watch?v=cgTUmz7Hq4I&feature=youtu.be

* Temi has performed with 'Gotham Radio Theatre' at Lincoln Center

* Join us at the Cabaret Performance written and performed by Temi Hason.
Where she will be telling stories, singing songs and playing Cello!
You will find a piece from yourself!
October 19th 8pm @Pianos
https://www.facebook.com/events/179750515694076/

*After the wonderful performance at Owls Hoot Barn with Anna/Kate Band, where they have performed original folk-pop songs.

* You can follow 'A Musical Home' from
Minion Mag Magazine.
Temi is a proud founder of 'A Musical Home' which offers custom made music lesson for children from 4 months to 5 years.
http://minionmag.com/a-musical-home-erken-muzik-egitimi/

* Temi has joined the cast of 'Your Name On My Lips' which is a part of the 'Dream Up Festival'
She is honored to make the Cello parts come alive!
Check the show out on 'New York Times':
http://www.nytimes.com/theater/show/413509/Dream-Up-Festival-Your-Name-On-My-Lips/overview
_http://www.broadwayworld.com/article/YOUR-NAME-ON-MY-LIPS-to-Premiere-at-Dream-Up-Festival-20150806#

*Here is a pix at Judson Memorial Church from our Performance with Ann&Kate.
It is amazing to share the stage with this amazing team! Stay in tune to hear some awesome song and performances!

* Temi has taken part in 'Greek Legends' where she has been talking about the yogurt tales from Turkey in both Turkish and English.

* Tango is a new video game designed by 'High5Games' that Temi has take part in as an actress and as a Cellist. You can see her character as a cartoon style and hear her Cello playing in the recording.

* Temi has performed as a Cellist in the amazing rock musical 'Spring Awakening' at American Theatre Of Actors.
Two years ago she performed in 'Spring's Awakening (the play) ' as an actress.
She is very happy to be working in the same show but the musical this time and as a Cellist!

*Temi has performed as a Cellist in a new Musical 'The Field' at Under St Marks Theatre.

* The new edition of Broadway Weekly is out.

* Here are the sneak peek from Temi's recent performance 'Tipping The Playpen' at Dixon Place. Click the link to see the video!
http://vimeo.com/69414407

* Temi has joined the cast of 'Bellini and The Sultan' as 'Hakira' which will be performed in FRINGE Festival in New York in August 2013. For details please visit:
http://www.tarteusa.com/news-and-events.html

* Be sure to Follow Temi's new column  'Broadway Weekly' on "Posta 212 Newspaper" to stay updated with what's happening in the entertainment industry in New York .
http://posta212.com/kultur-ve-sanat/broadway-weekly

* On May 15th 2013, Temi has performed for Ivy Connections exclusive event 'An Evening of Wine & Music' at The DiMenna Center among with three other amazing musicians.

* Temi will be hosting a Radio Show 'Broadway Here I Come' at Radyo Turkum every Friday at 2pm. Tune in to hear some news about Musical Theatre and Classical Music.

* 'My Life and My Songs' A Musical Theatre and Cello Cabaret Show written and performed by Temi has premiered in Turkey at 'Nina'.

* Temi has represented Turkey at 'Limmud International Conference' in England at Warwick
University.

* The new Documentary 'Turkish Artist in New York' Temi was be out soon! It is a special project for her which she has dedicated to her Grandpa.

*Temi recently had an interview with 'JRGON' check it out!
http://www.jrgon.com/kalamista-baslayan-macera-broadwayde-devam-ediyor
*Temi is thrilled to announce that she is cast in a new Musical 'Scheme Of The Super Bullies.' and will be performing at 'New York Children's Theatre Festival.'For more details please click the link below.
http://newyorkchildrenstheaterfestival.org/Scheme_of_the_Super_Bullies.html

*Here is an article about the Movie DEPARTURES.
http://www.jaredmobarak.com/2012/03/21/departures/

* Check out the article about Temi Hason on the newspaper 'Hurriyet IK'
http://www.hurriyet.com.tr/ik/20009812.asp

* An article about Temi Hason in 'Turkish NY'
http://www.turkishny.com/new-york/60-new-york/74063-yetenek-sizsiniz-new-york-secmeleri-suruyor

* Temi recently got cast in 'Something Outrageous'.She will be performing at 45th Street Theatre on October 15th, 22nd and 29th.
For more information:
http://www.smarttix.com/show.aspx?showcode=SOM16

*Stripper Lesbians is accepted to Frigid Festival NYC!
Temi will be performing as 'Aisha' the role she originated on February 22nd - March 4th.

Temi Hason is gonna be the guest at Radyo Turkum with her success story on August 18th at 7 pm so don't miss Serenin Gece Rotasi. You will have a great time listening to our very sweet guest!
* Check out Temi's Interview with 'Hurriyet USA.'
http://www.hurriyetusa.com/haber_detay.asp?id=32634

*Temi is cast as the lead in the short movie 'Home'.More information coming up soon!


*Here is the Trailer of 'Departures', where Temi was starring as one of the leading roles.
http://www.youtube.com/watch?v=QE2AQZ6ankM

* Temi is an Ensemble member of Rising Sun Performance Company.Check this out!
http://www.risingsunnyc.com/who-we-are.html

* Starting in May 2011, Temi will be performing at Algonquin Actor Residency every Friday Night at 7:00pm

* Check out Temi's interview at this month's 'Time Out Istanbul'

* May 15th 2011, Temi will have a mini resital with her Cello for The American Turkish Society 'Design As Cultural Link' event.
http://www.americanturkishsociety.org/upcomingevents.aspx#event231